Among the Impostors
-Margaret Peterson Haddix 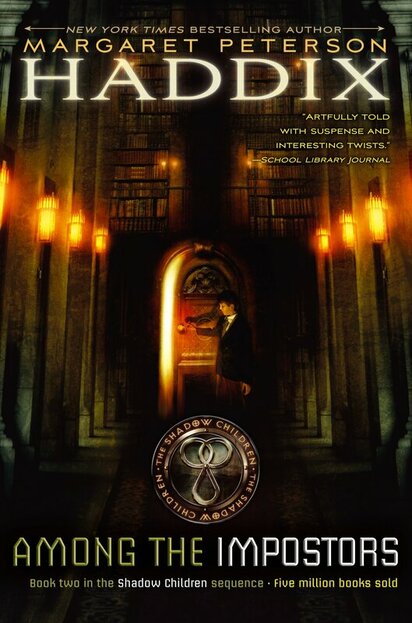 Luke Garner is an illegal third child whose entire life has been spent hiding from the dreaded Population Police. Now, for the first time, Luke is living among others. He has assumed a deceased kid's identity and is attending Hendricks School for Boys, which is housed in a windowless building and filled with cruel classmates and oblivious teachers. Luke knows he has to blend in, but he lives in constant fear that his behavior will betray him. Then one day Luke discovers a door to the outside. He knows that beyond the walls of Hendricks are the secrets he is desperate to uncover. What he doesn't know is where the answers to his questions might lead him.

In the world of Shadow Children, global drought has resulted in ruthless measures to control population growth. Only two children are allowed per family—third children are illegal. If they are caught, these forbidden kids could face imprisonment or even death. To survive, they must hide in the shadows, careful not to attract unwanted attention, and work together to avoid the dreaded Population Police. Readers won't be able to stop turning the pages as they enter Margaret Peterson Haddix's darkly dystopian world.

BL 4.9
5 Points
Activity 1: ​The world's population grows larger every day. Write a report on population: how it has changed over the years, how it affects our society, and ways of dealing with it.
Activity 2: ​Near the end of Among the Impostors, Mr. Hendricks explains that, “The Population Police can lie too...It suits the government’s purposes to say they are arresting third children rather than traitors.” Why might this be better for the government’s purposes? Are third children the real cause of the nation’s troubles? We are going through a time presently where people don’t trust the government, or they might think the government is totally right, and the rest of the people aren’t to be trusted. Create a Venn diagram labeling the circles “Imposters” and “Today.” How is our world similar to theirs? You need to put at least three items in each of the three areas to complete your project.
Activity 3: Luke's family lives on a farm, and he is very interested in gardening and hydroponics, the growing of plants in a nutrient-rich water rather than soil. He thinks that this will allow for more children to be born because there will be more food, and that is the ultimate problem. Learn more about these disciplines by trying to grow some plants of your own. Perhaps you can plant a small garden, or try your hand at hydroponics. Either give me a call (or email) and I’ll come see it, or send pictures via email for us all to see. Do you think it will be possible? Whether or not you are successful, your project will be!
Activity 4: ​Research the population control efforts of the Chinese government, the vilification of the Jewish people by the Nazis in World War II, or the racial hierarchy established between the Hutu and Tutsi people in Rwanda. Create an informative poster based on your research to friends and classmates. Discuss the ways in which each of these governments resembles the actions of the Shadow Children government. You can create your poster on a computer, or you can create it with your own hands.