But how can Genesis believe anything her teacher says when her dad tells her the exact opposite? How can she stand up in front of all those people with her dark, dark skin knowing even her own family thinks lesser of her because of it? Why, why, why won’t the lemon or yogurt or fancy creams lighten her skin like they’re supposed to? And when Genesis reaches #100 on the list of things she hates about herself, will she continue on, or can she find the strength to begin again?

​BL 4.5/11
COMMUNITY CHALLENGE:
The link on your right is an interview with Ms. Alicia Williams on
Nebraska Public Radio. Listen to it, and think about connections
between the interview and the book. Think about the title of the               https://n.pr/2DOrUKJ
interview, "A Teen Faces Colorism at School and at Home," and
the meaning of colorism. Write down three more questions you
would ask the author if you met her.
​CHANCE:
There are ninety-six things Genesis hates about herself. She knows the exact number because she keeps a list. Like #95: Because her skin is so dark, people call her charcoal and eggplant—even her own family. And #61: Because her family is always being put out of their house, belongings laid out on the sidewalk for the world to see. When Genesis reaches #100 on the list of things she hates about herself, will she continue on, or can she find the strength to begin again?

Instead of thinking about the negative things about yourself like Genesis did, I want you to make a list of the 10 BEST things about you. If you need help with this, ask around to your family and friends and see if they can help you out. You might be surprised about what they think of you!
​ACTIVITY #3:
The Brown Paper Bag Test in African-American history was a form of racial discrimination practiced by America in the 20th century. Whites and blacks compared an African-American's skin tone to the color of a brown paper bag. The test was allegedly used as a way to determine whether or not an individual could have certain privileges; only those with a skin color that matched or was lighter than a brown paper bag were allowed admission or membership privileges. Think about "the paper bag test" described in Genesis Begins Again. Why do you think it was so hurtful to the people in Genesis' family? Why did her grandmother use it on her daddy before he and momma were married? How did impact Genesis so many years after she had done it? Do you think a lot of Daddy's problems were from the feeling of never being accepted? How is "colorism" related to racism? Using a brown paper sack or a brown piece of paper, create an acrostic poem that makes you think about this "test" that was used. The words you can choose from to use are 1) Genesis 2) Racism 3) Colorism 4) Alcoholism 5) Grandma 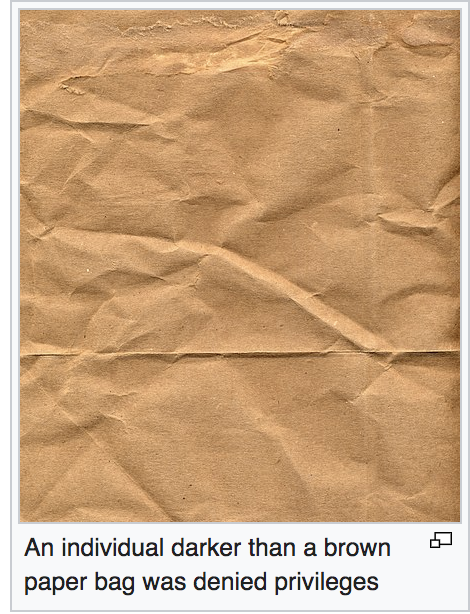