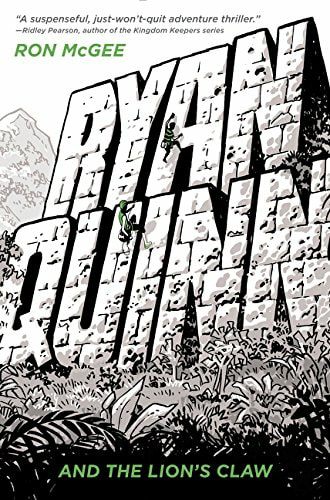 “A suspenseful, just-won’t-quit adventure thriller.” —Ridley Pearson, author of the Kingdom Keepers series
Ryan Quinn and the Lion’s Claw is the much-awaited sequel in the thrilling series about Ryan Quinn, a New York City teenager who would give James Bond and Jason Bourne a run for their money.
Ryan Quinn has never been a normal kid, and after everything that happened in Andakar, he’s about as far away from normal as could be. His parents want him to forget all about his death-defying escape, his role in the Emergency Rescue Committee, and the fact that they’ve been keeping secrets from him his whole life. But forgetting just isn’t an option for Ryan—not when there’s a traitor in the ERC who’s looking to ruin Ryan’s parents and expose the whole organization.
Unsure where to turn or who to trust, Ryan and his friends Danny and Kasey soon find themselves on another adventure, across the world, to help a musician whose words have started a revolution. It’s a globe-trotting mission more treacherous than Ryan could have ever imagined. And just when he feels like he’s cracked the final clue, Ryan stumbles across the biggest secret of all—and it’s about him.
Fans of Alex Rider and Spy School will be completely enthralled by the second book in Ron McGee’s high-stakes Ryan Quinn series.
BL 5
8 Points
Activity 1: Choose one of the Incidents of Terror below and find at least three historic newspaper articles. Try to find at least one on the day or day after the incident occurred, one within the same week, and one that is within two weeks to two months after the incident.
Newspaper articles can be downloaded from:

• The Washington Post website http://www.washingtonpost.com/ Write the name of the event in Search and depending on the results you can refine your search by clicking on Advanced Article Search.

Analyze the reports in light of the following:
• In what ways did media accounts change over time? For example, if there were victims, how many victims were initially reported? Did that number change?
• What caused the change in the reporting?
• Was language used in the accounts that may have intensified or diminished public fear?
• First impressions are lasting: How do you think early reporting
Activity 2: Ryan travels all over the world. Using a world map, trace his travels.  If you can’t determine the difference on the map of the loctions in Africa, just do the best you can. The book itself travels back to New York, but Ryan is still in Africa.
Activity 3: Create a survival kit. If you had to travel at the drop of a hat similar to what Ryan does, what would you make sure was packed into your small duffle or suitcase? It has to be small enough for you to carry around and ready at all times. It would also have to be able to be taken on a plane as a carry on, if you needed it. You can either write a list of the items you would put into the bag, or you can draw a picture of what the bag would look like. Do you think you would be a good spy??