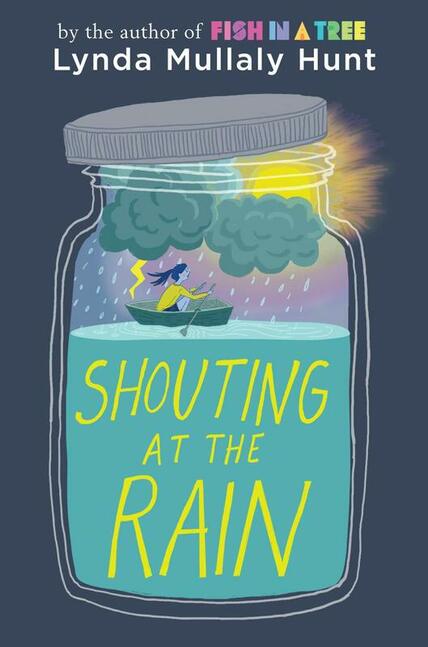 ​From the author of the New York Times bestseller Fish in a Tree comes a compelling story about perspective and learning to love the family you have.

Delsie loves tracking the weather--lately, though, it seems the squalls are in her own life. She's always lived with her kindhearted Grammy, but now she's looking at their life with new eyes and wishing she could have a "regular family." Delsie observes other changes in the air, too--the most painful being a friend who's outgrown her. Luckily, she has neighbors with strong shoulders to support her, and Ronan, a new friend who is caring and courageous but also troubled by the losses he's endured. As Ronan and Delsie traipse around Cape Cod on their adventures, they both learn what it means to be angry versus sad, broken versus whole, and abandoned versus loved. And that, together, they can weather any storm.

BL
Points
Activity 1: Delsie lives on Cape Cod. What do you know about Cape Cod? Where is it even at? Create a brochure about the location and tell me the top three things there are to do there (at least what you think, there are way more than three!!) Either create your brochure on a computer or draw it out if you’d like. This is definitely a place on my bucket list that I want to visit someday. Have you ever been there?

Activity 2: While writing Shouting at the Rain, Lynda would periodically have this picture flash in her mind. A picture of her big brother, John, clasping his fingers together to create a step for her to get over fences. It’s a very literal memory for this idea of raising up the people around us. Helping them over their fences. One of her favorite people in Shouting at the Rain is Esme. She helps Delsie over her metaphorical fences. Esme has what is referred to as “strong shoulders.” She is rock solid. She is there for others. She keeps her promises and takes responsibility. She is leaned on, looked up to and trusted. The world is a better place because Esme is in it. There are some others in the book with strong shoulders, as well as some without them. All of these people make up Delsie’s world on Cape Cod.  So, Esme serves what she calls, “that nourishing tea” in Strong Shoulder mason jars, which were used about a hundred years ago. At one point, Delsie asks Esme why she calls her tea, “That Nourishing Tea.” After all, “…it’s just a bunch of dried leaves in hot water,” she says. And Esme tells her that it isn’t the tea. It’s what happens when people sit down across from each other and drink tea. They don’t just look at each other. They see. They don’t just hear. They listen. And these are the times when true human connections are made. When we listen, and see and have the bravery to share pieces of ourselves that let others learn who we really are. The things we long for, the things we fear, our hopes and triumphs and failures.

This book is all about CONNECTIONS. Every character is there to show us something about connections – including when to let go of them.

So, if you take the letters of

And mix them up, you get

SHOUTING AT THE RAIN

So, celebrate someone you know who has strong shoulders. Who fits the description on this certificate. (And you will probably strengthen your connection when they learn you see them in this light.)

Activity 3: Lynda Mullaly Hunt wanted to find a fun way to show how we can all look at the same thing and see different things, so she created anagrams throughout. An anagram is a word or phrase formed by rearranging all the letters from another word or phrase. Each speaking character’s name is an anagram that is a hint about the character’s personality, life, secret, or a trait they have. For example, the character KATRINKA SCHOFIELD (the director of the musical) can be rearranged to IT’S A HARD KNOCK LIFE. Here is a list of the characters’ names. You might want to go to Lynda’s blog for hints. Here they are: